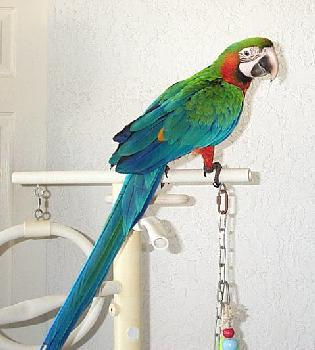 The Debate About Hybrid Parrots

Kosh is a harlequin macaw. That is a term made up by breeders for a bird that is half Greenwing macaw and half Blue and Gold macaw. The hybridization of macaws and other parrots is a controversial issue, drawing strong arguments from those on both sides. Some bird lovers insist that hybrids should not be bred because they can muddy the “pure” bloodlines of the parent species. Others proclaim that hybrids are more beautiful, more intelligent, and in some cases, less prone to disease than the pure species that they were bred from.

In point of fact any species becomes distinct from other creatures like it due to isolation. It becomes cut off from the others and begins to evolve different traits. If that isolation ends, then new species may begin to cross bred with the old one. I read a very interesting report of a naturally occuring cross between a polar bear and a grizzly bear. This has occurred due to the change in climate that now allows these two species territories to overlap. The article referred to the cross as a “pizzley”.

Man has long bred animals that were crosses of two species. A mule is a good example, since it is a cross between a horse and a donkey. He has also bred new types of cows, pigs, chickens, dogs, etc. from other different species or breeds. So I am personally not overly upset by hybrid parrots per se.

I think that both sides of the debate miss the larger question, however. There are too many parrots of all types being bred, hybrid or not! The number of birds for adoption at anyone time proves this. Kosh is a wonderful bird and I would not trade him for anything, but if I knew then what I know now, I would not have bought him. I would have adopted. There are wonderful birds of all types, hybrid or not, who need homes.
Don’t shop. Adopt!