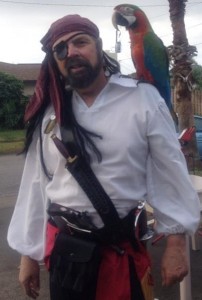 There is much debate about the actual existence of Red Legs Greaves. As pirates go, Red Legs Greaves was not only a successful one but also a lucky one. He managed to survive his life as a pirate and live to ripe old age.

What makes this even the more remarkable was how his life began. The story around Barbados is that Greaves was born there about 1649, the son of Scottish or Irish slaves. Anyone familiar with the movie “Captain Blood” recalls the scene at the beginning of the movie where several men are tried for treason and eventually sold into slavery. This was a common practice in England and was the case of the parents of Greaves. Apparently Greaves’ father was the on the wrong side of the Civil war when Cromwell came to power (War of the Three Kingdoms), as were many people in Scotland and Ireland.

Greaves got his nickname “Red Legs” from this heritage. The kilt wearing Scots and Irish were known for going bare legged in any weather and this lifestyle led to “red legs” in the Caribbean sun. Red Legs was a common nickname for the Scots and the Irish. Most accounts state that Red Legs was Scottish, but the name, Greaves, is actually British. It is more likely that the Greaves family bought an estate in Ireland and intermarried with the locals. This was common in that time, and many of the transposed British supported Ireland in the war.

A short time after the elder Greaves arrived in Barbados as a slave, young Greaves was born and while the new son had nothing to do with the Civil War in England, he paid for the sins of his father and was a slave from the moment of birth. At first, life as a slave was at least tolerable because Greaves had a kind master. But his life took a turn for the worse after his parents as well as his master died and the orphaned boy was sold to another master who delighted in beating the young man. The death of his parents at a young age, could well account for the fact that there is no record of Red Legs given name. He was most likely just called, boy or Greaves by his owner.

While still in his teens, Greaves decided his only hope for survival was to run away and one night he swam across Carlisle Bay in attempt to find his freedom. After making his escape, Greaves stowed away aboard a ship hoping to sail off to a safe harbor. Unfortunately the ship belonged to a notorious pirate known as Captain Hawkins. Hawkins was known throughout the Caribbean as an unusually cruel captain, who found joy in torturing his captives and mistreating women. He rarely offered quarter to ships he attacked and was feared by even his own crew. The only reason his crew remained loyal to him was because he had a knack for finding rich prizes.

Once Hawkins found Greaves stowed away on his ship he gave him the option of signing the ship’s Articles, no doubt offering the articles on a platter along with a pistol. It is uncertain if Greaves would have signed the Articles without threat but once driven to the calling of piracy, Greaves became very efficient, and quickly rose to eminence. Despite his success, Greaves’ childhood as a slave led him to hate Captain Hawkins. Greaves refused to kill for no reason and would not partake in torturing prisoners. It didn’t take long for the two men with distinctly different moral codes to come to blows. While it is said that the two men had a duel over the issue, it is more likely Hawkins attacked Greaves for not following his orders and bloody fight ensued. In the end, Greaves managed to kill Hawkins and the crew which had lived in fear of the cruel Hawkins immediately elected Young Greaves the new Captain.

Greaves in turn drew up a new set of Ship’s Articles which were more to his liking, which gave stiff penalties for maltreatment of prisoners and women and a willingness to offer quarter. Much to the delight of Greaves and his crew, what followed was a period of the highest piratical success. As his reputation spread though out the Caribbean “Red Leg” Greaves became known for his humanity and morality. He never tortured his prisoners, nor ever robbed the poor, nor maltreated women.

His greatest success of all was his capture of the Island of Margarita, off the coast of Venezuela. On this occasion, after capturing the Spanish Fleet, he turned the guns of their warships against the forts, which he then stormed, and was rewarded by a huge booty of pearls and gold. And as was true to his form, he didn’t sack the town, or rape and torture the Spaniards, he just took the money and ran.

Having made off with enough money to last a life time, Greaves retired to the respectable life of a planter in the Island of Nevis. The story would end at this point but unfortunately for Greaves, one of his former victims happened to cross his path and turned him in for the bounty on his head. As was typical of the time he was quickly tried and found guilty and sentenced to be hanged in chains. (Moral or not, he was a pirate!) He was cast into a dungeon to await execution, when the great earthquake came which destroyed and submerged the town in 1692, and one of the few survivors was Greaves. Greaves was rescued by a whaling ship and in turn he joined the crew and served remarkably well. Later he would turn pirate hunter and received a pardon for his earlier crimes after assisting in the capturing a gang of pirates that had been ravaging the whaling fleets.

After Greaves became a legally free and pardoned man he once again retired to a plantation becoming well known for being a charitable and kindly man who gave generously to many public institutions. Greaves died of old age, universally respected and missed by all in his community.